Tempelhof is situated in the south- central of Berlin. The district is especially famous for its former airport. In the years of the airlift from 1948 to 1949, hundreds of what were known as “Rosinenbombers” or “Candy-Bombers” landed there. During the Soviet blockade of Berlin they provided the western part of the city with food and thermal coal. Today the memorial at the former main entrance reminds us of the time of the “Berliner Luftbrücke”.
In 2008 the air traffic dropped once and for all. Since 2010 the “Tempelhofer Feld” has been a huge recreation area and place of relaxation in the middle of the town. Nowadays it’s only kites, birds and the odd model plane that glide through the air. In 2014 Berliners voted against a development of the open space, showing how much the “Tempelhofer Freiheit” had already grown on them.

As a residential district, Tempelhof is known for its uniqueness and tranquility. The urban landscape is characterised by family-housing settlements interspersed with apartment blocks and industrial areas and commercial spaces. There are beautiful, green residential locations with restored old buildings at affordable prices. The “Flieger” quarter around the Adolf-Scheidt-Platz offers families appealing terraced houses with gardens in a central location. From here it’s just a stone’s throw away from Kreuzberg and Schöneberg. The area around the station “Südkreuz” is being recognised more and more as an attractive residential location. The quiet streets lined mainly with old buildings offer affordable living with good transport connections. Towards the south you can find the Tempelhof areas: Mariendorf, Marienfelde and Lichtenrade. It is becomes quieter and more rural here and it barely feels like you are in the metropolis Berlin.

By using the U6, which crosses the whole district, you have quick access to the centre. The “Berliner Ringbahn” (circular railway) borders the south of the former airport. The new railway station Südkreuz offers a rapid connection to all parts of the city as well as to long-distance transport connections. 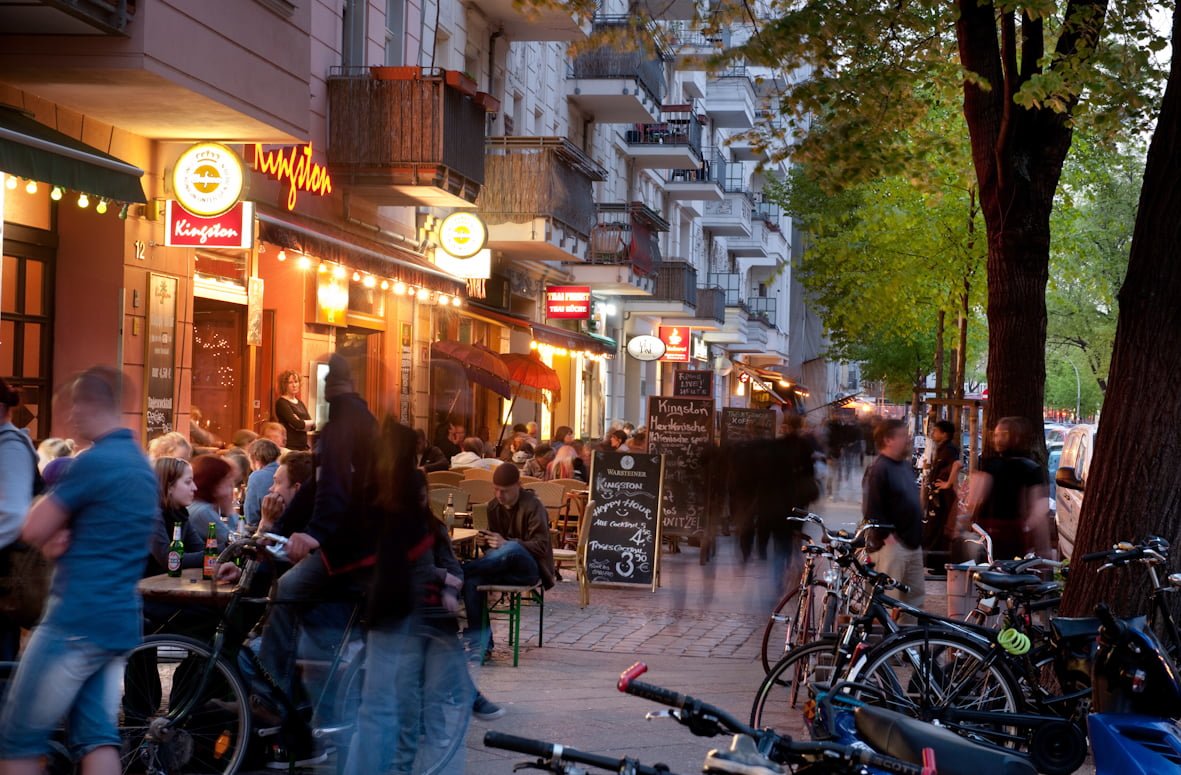 John F. Kennedy’s historical speech in front of the town hall (Rathaus Schöneberg) is an unforgettable part of the district’s history. On 26th of June in 1963 the former American president spoke in front of more than 400.000 citizens of the divided city:
“All free men, wherever they may live, are citizens of Berlin, and therefore, as a free man, I take pride in the words ‘Ich bin ein Berliner!’ ” 8 days after the assassination of John F. Kennedy on 30th of November 1963 the former Rudoph-Wilde-Platz which is located in front of the town hall was renamed in John F. Kennedy Platz.

The district is part of what is known as the Old West”. It’s a bit quieter and more ‘earthy’ here than in Kreuzberg and definitely more than in Neukölln. The inhabitants are, in comparison, not as hip but the district is attracting a younger crowd and is enjoying a rejuvenation. Schöneberg is a colourful and pleasant mix of cultures. Around the Nollendorfplatz you have the traditional gay and lesbian scene. You will find a high density of esoterics in the pretty Akazienkiez. Affordable old apartment buildings are becoming scarce, due to the the district’s growing popularity.
The revival of the western districts are especially noticeable now that the rise of rental prices in the sought-after eastern parts of the town are getting prohibitively more expensive. More and more families are becoming more attracted towards the West. The housing and facilities around the Eisenacher Platz and towards Friedenau are very pretty, but are have already become quite expensive. You live more favourably, closer to Kreuzberg near to the Julius-Leber Brücke. The Crellekiez, especially, is a tranquil corner with a small pedestrianised area and pretty cafés surrounding a square on which children happily romp around.

Take the metro line, U7, at Eisenacher Straße and in no time at all you are in Kreuzberg or Charlottenburg. The S1 (city train line 1) runs underneath the Julius-Leber Brücke, towards the centre (Potsdamer Platz, Friedrichstraße) or, in the other direction, directly towards the Wannsee. At Schlachtensee station, alight the train and you are right on the waterfront. The clear Badesee is pleasant to walk around and at about half way round you can rest in the Fischerhütte’s large beer garden.